Sifting through my vast warehouse of foibles for a post, I could not seem to focus.  My mind ran something like this:

How about the cowboy in the post office - or feeding maize to the class fish - uh-oh, the red dog needs to go out - hey, did I already do a post on the time our dachsy ate a spider and blew up like a Shar-Pei?

You get the picture. 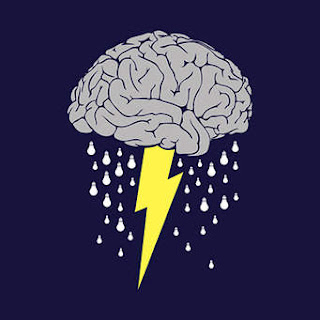 I tell myself, "QUIET DOWN! I AM TRYING TO BRAINSTORM!!"

Seriously? That is, in fact, the problem.  I am under attack by
BRAINSTORMS!!

With Mr. Wonderful: "Email says we're part of a class action against one of those ticket vendors. Maybe we'll get a discount on tickets. See the Black-Eyed Peas. Remember when we convinced the girls that ketchup on  black-eyed peas would wreck the good luck?"

I blame the web.

And I say a heartfelt but very short prayer - so I don't start meandering and bring Mother Teresa into it - NOT HER PROBLEM!

Back when D1 was the lone sprout on our family tree, Mr. Wonderful bid Uncle Sam goodbye and finished his degree at In-State University (IU) regional campus. Our sole income - a whopping $298.00 per month under the G.I. Bill - also had to cover tuition. We rented a little house from St. Raymond (my dad) for $134.00 a month. Thus, I was always on the prowl for freebies and cheapies to enrich baby D1's world. 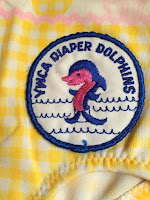 The library, of course, and church and the YWCA, where we found "Diaper Dolphins," the latest in mother/baby swim classes. This is D1's ACTUAL swimsuit with patch. (A post on hoarding is overdue.) 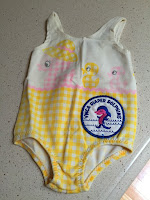 We both loved this program - at least I am pretty sure. At bath time D1 began hurling her rubber ducky into the tub shouting "one, two, frrreeeee!" Surely, her adorable way of sharing her joy with ducky.

Anyway, when we learned that D1 would not be an only child, I hoped to stay with Diaper Dolphins until someone shouted "Whale" (which did happen, but that is another post).

If the 1970's are history to you, you should know that pregnancy was hush-hush. Expectant moms essentially pretended not to be pregnant. No one announced her with-child status until little children starting asking if there was a "beach ball under there," and then only to a select few (the grandparents). 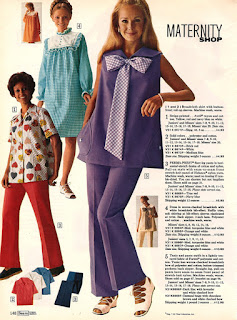 Our clothing was also in on the ruse. We wore yoked, pleated or gathered over-blouses and dresses (no hint there, right?). Often these fashion statements came with a huge bow under the chin - as in "no-one-will-notice-I-am-wearing-a pup-tent-over-a-watermelon-as-their-gaze-rockets-upward-to-the-bow." (See purple number at right.)

Maternity swimwear also took a camouflage approach, with the top designed to hide several small children.  No warning labels back then, but I would offer this: "Warning: Check for stowaways before laundering."

Anyway, the Sears Catalog came to my rescue with a turquoise and green print number - ON CLEARANCE.  Catalog orders were snail mail or phoned in. Since this was a hot item (sale!), I should phone.

(Also, when you talk with an 18-month-old for most of your waking hours, you long to speak with an adult.  Any adult.  And adults answered the phones at Sears!)

So I called. I gave the page number in the catalog, the size, color number and pricing. Meanwhile, the saleslady looked up the item in the same catalog and wrote up the order. She chatted and suggested other purchases as she got all the details.

Then, we verified: "You are ordering a turquoise and green two-piece maternity swimsuit in size small, correct?"

Keep in mind, dear reader, we had not announced.

And Almira was our very chatty (two-pots-of-coffee) neighbor who lived across the alley.

And she worked at Sears. Um, apparently in the catalog department.

Still, what are the chances that our neighbor would find out I was pregnant before the grandparents because I ordered from Sears?????

I had no choice but to admit who I was.  We had a good laugh, and I cautioned that we had not yet announced. So far as I can tell, despite the caffeine, Almira never told.

And it was a blessing to have a caring friend who knew why my mornings were queasy, and to advise on keeping D1 from unloading her dresser every single day. (Yardstick through the pulls.)

And so D1 and I continued to enjoy Diaper Dolphins.

And D2 joined us for the swim - stylishly concealed under a turquoise and green tent.

I like to think I have passable technical skills. I am writing this on my iPad. My iPhone outsmarts me only occasionally. (Okay, I phoned D3 during her prom when I was trying to watch a DVD, but that was years ago.)


Even so, there are times - like this weekend -  when I know my limits.

By way of background, I had watched our youngest grandson at D3's house for a week last summer while his parents were away. They left on Sunday night.  It was Wednesday when I finally stumbled on the secret combination to watch TV. Even then, I didn't dare turn it off. There are two clickers and an X-box thingy. And even though it says "HDMI 1" on the screen, DON'T YOU BELIEVE IT!

This weekend I watched the littlest guy again, while D3 and her husband attended a wedding. D3 prudently gave me instructions on how-to-play-little-guy's-favorite-movie.

She led me through the steps on the X-box control. (Why does it look like a mini flight simulator yoke?) At one point, she looked hard at me and said, "Mom - your eyes are glazing over - are you getting this?"

Here is what I remember: The large button with an X turns it on. Amid the multicolored buttons to the right, the green one is important. Also, although there are buttons to both right and left of the X button, focus on the left one. If Mater suddenly speaks Swahili, employ the joystick at the far left.

The part she didn't tell me - but I picked up over the summer: KEEP THE REMOTES UP HIGH!! Still, only once did I shout "DON'T TOUCH THAT BUTTON!" as I dove for the remotes. And little guy thought it was pretty funny. Anyway, it was just one night and we made it through the movie part.

However, I was then flummoxed by the bathtub. That should be low tech, right? Read on. When I last bathed little guy, he used a plastic tub in the big tub. No more. He's a big-tub-boy now. I started to run bath water, but wasn't sure how to plug the tub. I have only showered there. There is no stopper visible, although there is a lever on the tub for one. 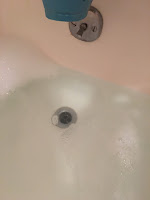 I searched the surrounding area. There were the familiar bath toys, and also something new.  A round soft blue thing with a suction cup on the bottom. Maybe it's like the whale over the water spigot - meant to keep little guy from injury - so I put it over the opening - about the right size - and filled the tub.

Little guy played happily with bath toys as I washed his hair, scrubbed off the days' grime. The stopper came off a time or two, but generally I would give it 3 1/2 stars. Then we brushed his teeth, put on pj's and played a bit in hopes that he would be sleepy soon.

When his parents came home, his daddy put little guy to bed and I told D3 of our adventures. Mentioned that it had taken me a bit to figure out how to run the bath without the little tub, but that the new stopper was pretty ingenious.

"Um, you know, the blue one with the suction cup.  I had to put it in a few times but it worked pretty well. Expect it keeps little guy safe, too," I replied.

It is pretty rare, but D3 was actually perplexed for a moment or two. Then -

"MOM! That's a shower speaker!! Are you saying you USED A BLUETOOTH TO KEEP THE WATER IN THE TUB??"

Hindsight:  Take nothing for granted.

Still, I have photos. 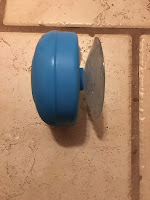 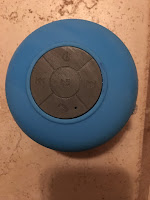 You be the judge.

Meanwhile, I learned this week that there is a patron saint of technology. Excuse me while I do a novena . . . 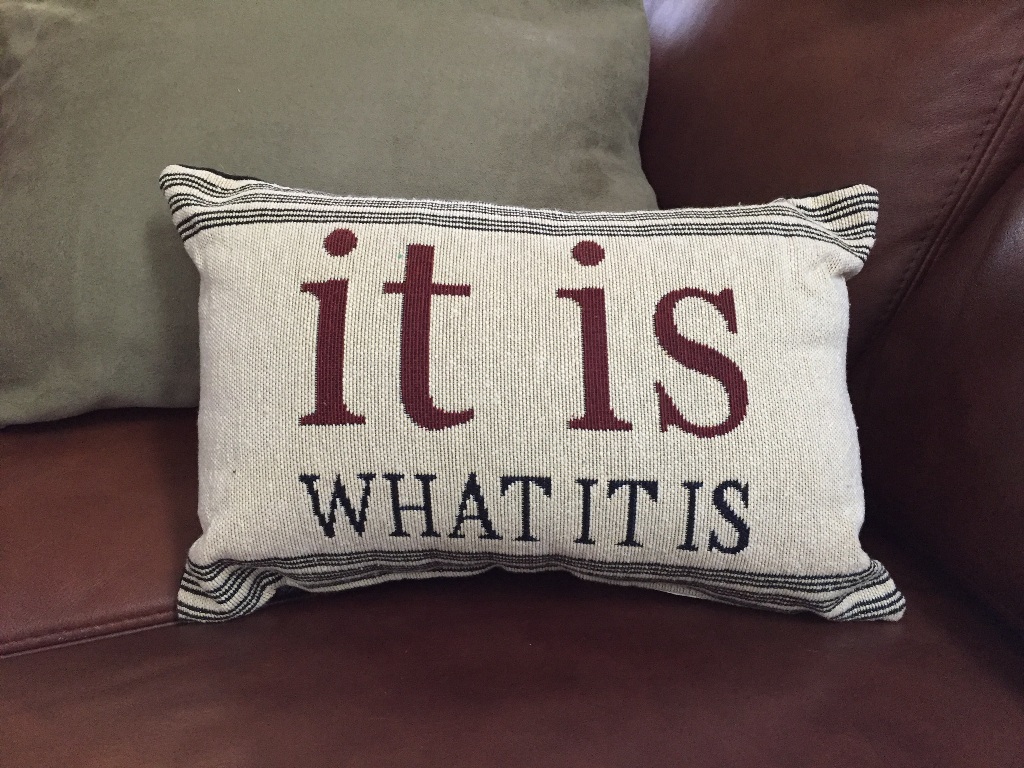